Spring, Summer, then Back to Spring

The weather is confused, the plants are confused, and the squirrels are confused. (Of course, who can really tell with squirrels!) We've gone from 40 degrees to 90 degrees and then back to 35 degrees.

But you know what, it doesn't matter at the Greenville Arms 1889 Inn and all the wonderful places to visit in our region. The forsythia is still a brilliant yellow. 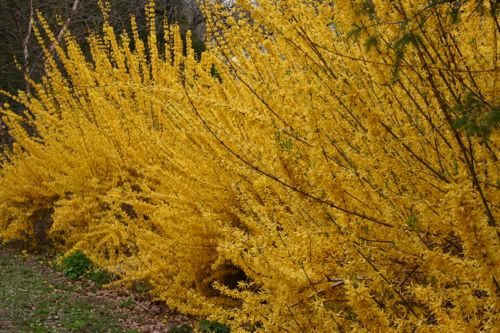 The perennial flowers are coming up. 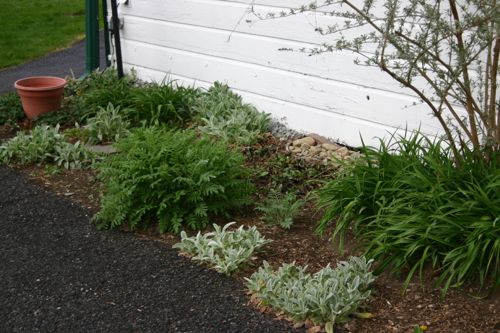 And the Dalmatians are still lovable! 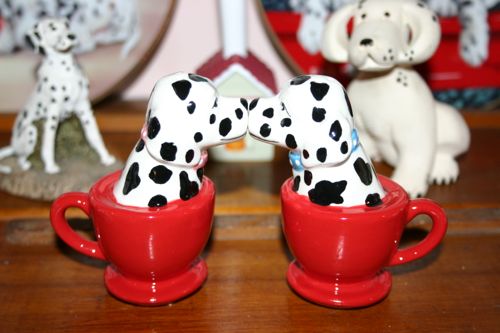 This is a salt and pepper set that I bought at the Fly Creek Cider Mill in Cooperstown on our day trip last week. I'm always on the look out for new additions for my Dalmatian collection that we have on display in the built-in cabinets in our dining room. 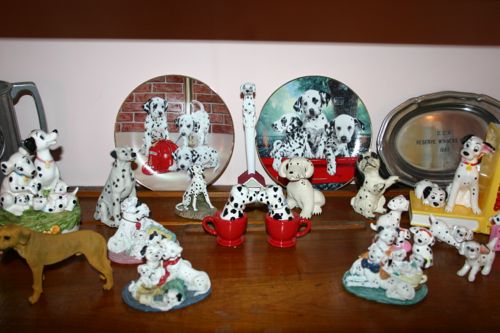 Yes, that is a token Ridgeback figure in with the Dalmatians! I've had Dalmatians since I was 15 years old and have been collecting the figures for quite a while, too. Our current Dalmatian, Hudson, is number 6. We also have Rhodesian Ridgeback, Bree, who is Hudson's best buddy.

They are both wonderful inn dogs and are very friendly, having grown up from puppies at the inn. If you stay at the inn, you may get a chance to greet them when we take them out for walks on their leashes.

Posted by Kim Marguerite at 1:10 PM No comments:

Taking advantage of a beautiful Spring day and an empty inn, Mark and I finally had the opportunity to find out what a number of our past guests have been raving about!

Cooperstown, an active town in the northern foothills of the Catskill Mountains, is home to the Baseball Hall of Fame, art, history, opera, state parks, and premier restaurants. It is about an hour and 20 minutes from the Greenville Arms, but it is a beautiful drive through rural upstate NY. It was lovely on our trip, but I can just image how stunning it is in the Fall or Summer.

The first stop on our jaunt was the Fenimore Art Museum. The Fenimore is the showcase of the New York State Historical Association, housed in the historic Fenimore House, an impressive neo-Georgian house built in the 1930s on the site of James Fenimore Cooper's early 19th century farmhouse on the shore of Otsego Lake.

They had a number exhibits. The current exhibits included Between the State: Photographs from the American Civil War; Homecoming of the Thaw Collection of American Indian Art; and Spellbound: The Metropolitan Opera's Armide (costumes of the opera).

To prime ourselves for the tour, our first stop was the charming cafe right next to the gift shop. We enjoyed some delicious soup, with olive bread, and Starbuck Lattes.

The exhibits were wonderful and the grounds delightful. We kept commenting to each other that we could easily see ourselves spending more time in Cooperstown to soak in the experiences more thoroughly.

I especially enjoyed the American Indian art. As a fiber artist myself, I could really appreciate the tremendous skill and dedication it took to create the works of art, such as the beaded and embellished clothing and ceremonial items.

This is a gazebo outside the museum with a fabulous view of the lake. 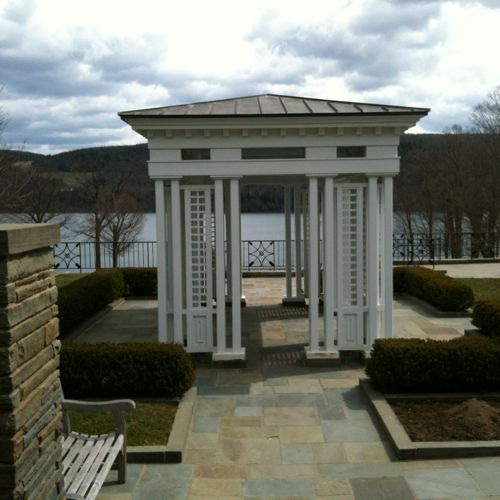 A historic log cabin of the type built by the native peoples in the Ostego area. 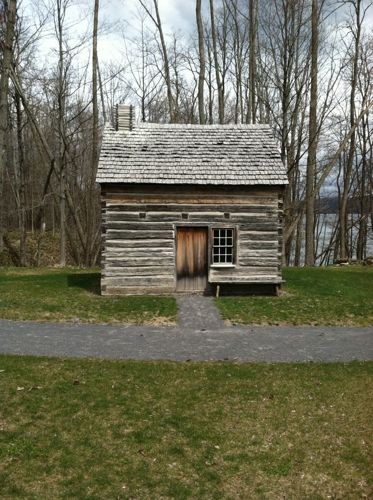 Right across the street from the Fenimore is The Farmers' Museum. (You can get a two museum entrance pass at a discount from either museum.) The Farmers' Museum is one of the oldest rural life museums in the country. It gives you the chance to experience 19th-century rural and village life through demonstrations and interpretive exhibits. 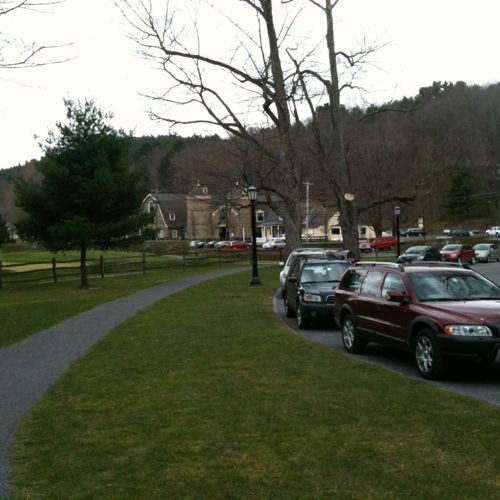 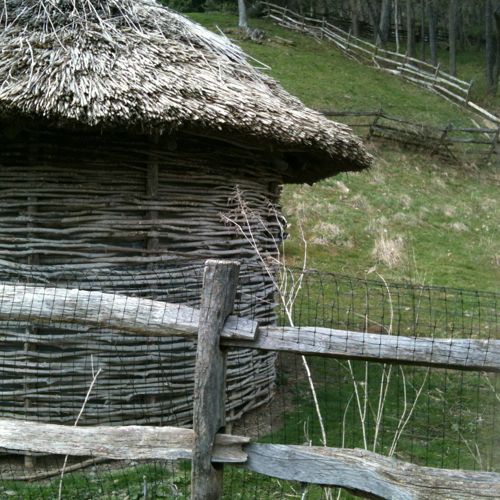 While all of the buildings were not staffed this early in the season, we enjoyed talking to an apothecary, innkeeper, farmer, and the farmer's wife. At the apothecary we learned how pills were created, watched leeches wiggle around in the glass bowl, and learned that the 19th-century apothecaries were the same multi-purpose shop that the modern drug store is. Beside being the source of medications, villagers would also come to the apothecary for herbs for teas, pigments for printing, dying of fibers, and house paints.

The life of the innkeeper sounded quite familiar to us!

An interesting historical note was that inns were often taverns as well, and the designation "Bar & Grill" actually came about because the bars in these inns were often inclosed in a small section of the tavern that could be closed for business by lowering a wooden grill over the bar. Hence the designation that this inn had a "bar and grill" It had nothing to do with what was on the BBQ!

This is a maze made from hedges. 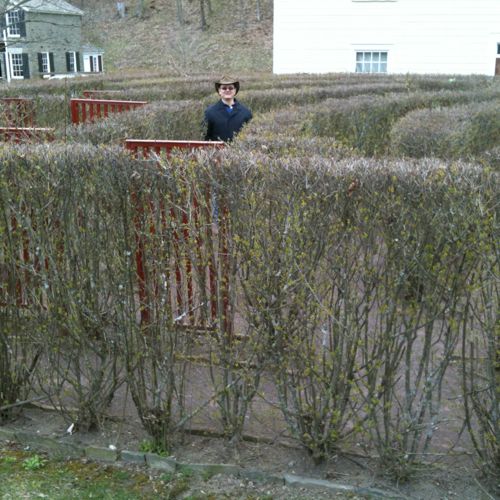 The next stop on our day trip was the Ommegang brewery. We carry these superb beers at our inn, so we were certainly familiar with them, but it was fun to take part in the beer tasting at the source! 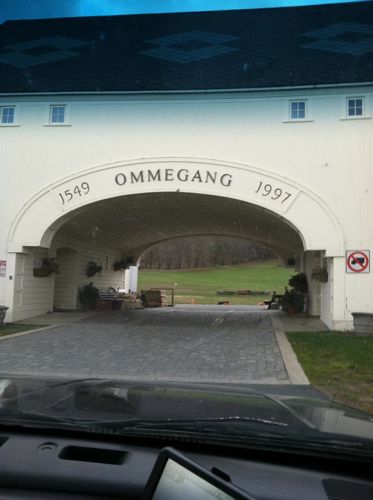 When we stepped out of the tasting/shop building after the tasting, the air was filled with the scent of brewing wort (barley sugars and/or hops - part of the process of brewing beer). Definitely worth just standing there and taking deep breaths! 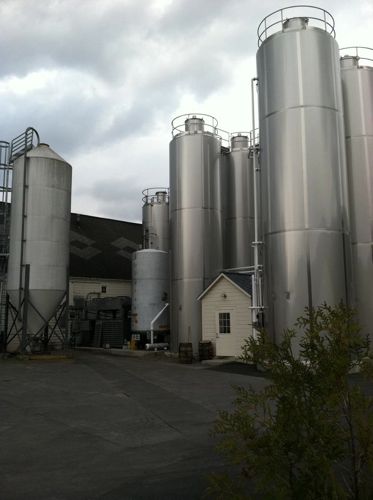 After smelling the barley, we were reminded that we were getting hungry! So we headed into downtown Cooperstown to Alex and Ika, a restaurant recommended to us by the guys at Ommegang. Excellent choice!

Alex and Ika is a quaint bistro located in the back of one of the Main Street buildings. Mark got the Thai-style duck dish and I got the Tipsy Barbecued Potted Pig: Crimini Mushrooms & Brandied Chipotle Roast Pulled Pork with Creamy Truffled Mac & Cheese. Yum! 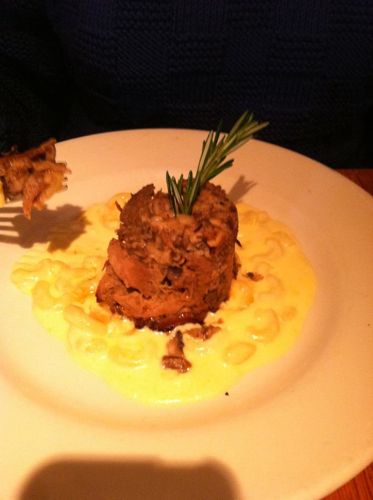 I'm a fool for anything with truffles and/or truffle oil and this dish did not disappoint. It was an appetizer, but I was saving room for the dessert - Chocolate Chocolate Port Thing. The dessert was pure chocolate decadence resting in a lovely light vanilla creme anglaise.

We'll definitely have to try this restaurant again in the future. According to Rachel Ray, they have "one of the best lunches in town and don't miss the fingerling fries."

All-in-all it was a fabulous day trip. We had departed the inn at around 10:00am and even after all our adventures, we still got home by 8:30pm. We'll definitely be going back.

Posted by Kim Marguerite at 10:10 AM No comments:

Easter is always a busy time around the inn. This is because it is the biggest chocolate selling time of the year, so our chocolate manufacturing for Life By Chocolates is going full swing. When the chocolate temperer is going the whole inn smells fabulously of chocolate.

Besides the chocolate rabbits (organic dark, milk, or vegan), another popular confection with the folks coming to our shop were the colorful and delicious Peanut Butter Bites. The peanut praline filling is made right in our kitchen from organic peanuts and raw cane sugar. It sure beats a Reeses any day! 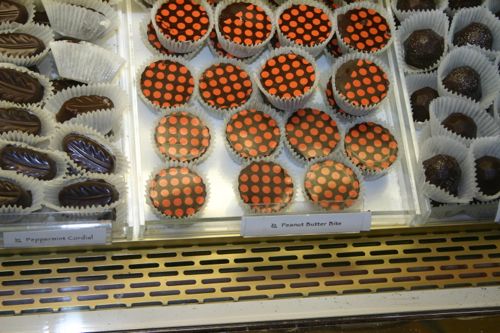 On Sunday, us kids, Mark and I, had fun coloring Easter eggs. We used water glasses to set up as the dye baths. 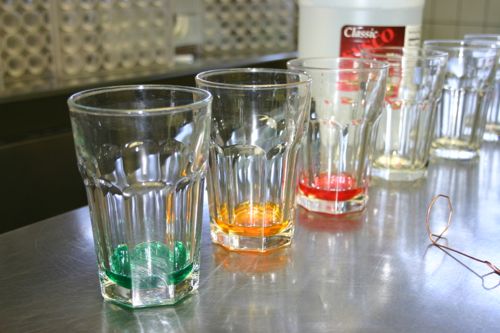 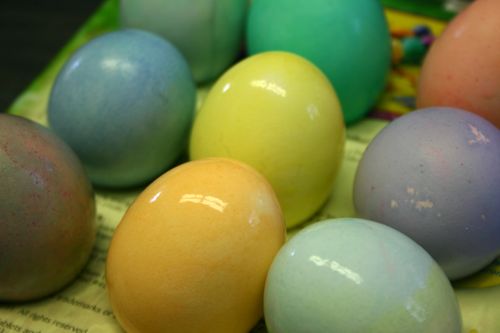 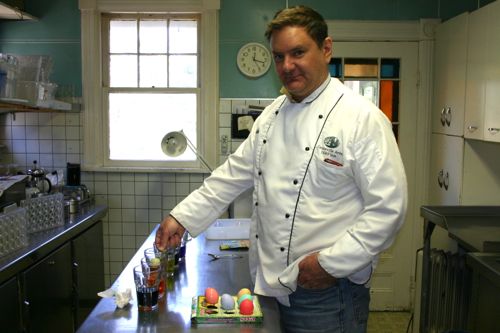 The finished basket of eggs! 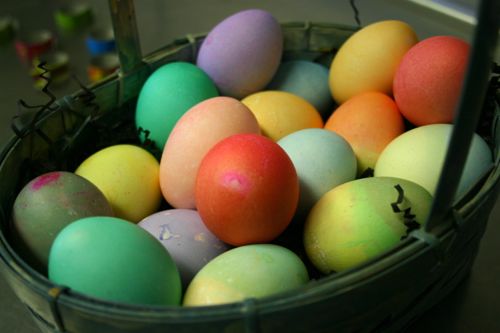 Posted by Kim Marguerite at 4:41 PM No comments:

Egg Colorizing and the Myth of the Dung Bunny

We have a pot full of hard boiled eggs ready for colorizing. Since we don't have family in the area, Mark and I will have our own little egg coloring party. Besides, I've been hankering for some deviled eggs and we might as well have fun with the white shells before cracking them to smithereens! 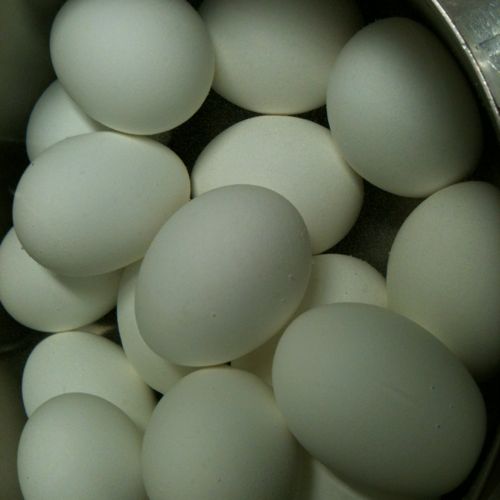 Now, I bet you're wondering what the dung bunny myth is all about!

When we first moved into the Greenville Arms around 8 years ago, we had added a few of our personal home decor items around the inn. One of these items, a brown bunny figure, caused quite the stir with our housekeeping staff. They must have had misgivings about us to start with - a couple from California, the land of Hollywood and Valley Girls (not that we lived anywhere near LA!) moving to rural New York to take over a Victorian Country Inn. The sight of the brown bunny in the front parlor confirmed their suspicions that we were clueless about country life. There was much whispered discussion amongst themselves and they decided to take pity on us and move the offending bunny out of the house and onto the front porch.

I'm sure they were disturbed when they kept finding that I moved it back into the front parlor! Finally the head housekeeper stepped forward and mentioned to me that is was probably not a good idea to keep a DUNG bunny (one made out of pressed cow manure) in the front parlor!

Luckily for everyone, we were not the city slickers that they thought we were and certainly knew the difference between a dung bunny and a stone bunny! I was well aware of the dung bunny product that was popular that year for gardens, but I assured them that our brown STONE bunny was NOT one of those! We all had a good laugh over this case of mistaken identity.

So here is our bunny all dressed for Easter, ready to preside over the finished basket of colored eggs. 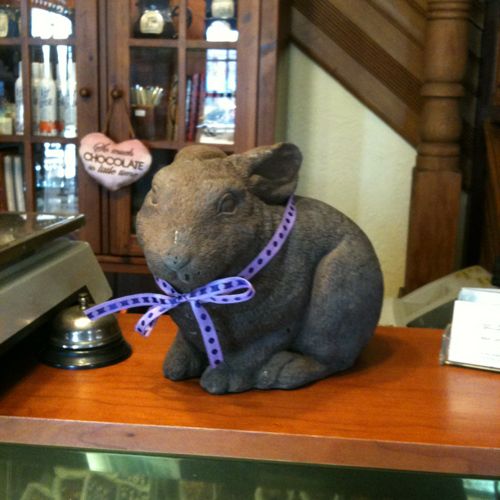 Posted by Kim Marguerite at 10:53 AM No comments:

It has been my goal to make quilts for all of the beds at our inn - that's a total of 21 x 2 (we need a back up quilt for each)! So here is the count so far: