I tried a new breakfast special the other day and it was a clear winner, as many have already asked for the recipe! So here it is. 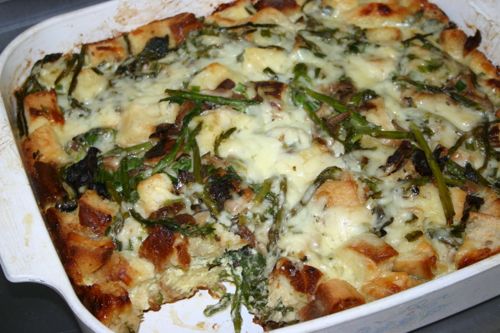 ** We make fresh breads every night for the dinners we make at the inn. So I like to use up the unused bread, for example when I last made this Strata I used a bit of a baguette, 2 onion marmalade rolls, and a bunch of buttermilk bread. The variety makes it interesting!

Bring a small pot of water to a boil and add the dried mushrooms. Remove from heat and let soak for about 15 minutes. Then drain and chop.

Melt the butter in a large (12-inch) skillet over medium-high heat. Add the asparagus, sprinkle with 1/2 tsp. each salt and pepper, and cook, stirring occasionally, until the spears start to brown and soften, about 3 minutes. Add the mushrooms and scallion whites and cook, stirring occasionally, for about 2 minutes. Remove from heat and let cool for a couple of minutes.

Put a rack in the center of the oven and heat the over to 350°F. Let the strata sit at room temperature while the oven heats. Bake until the custard sets and the top browns, about 30 minutes. Loosely cover with foil and bake for another 20 minutes. Let cool for 10 minutes, cut into square pieces, and serve.
Posted by Kim Marguerite at 11:11 AM

It has been my goal to make quilts for all of the beds at our inn - that's a total of 21 x 2 (we need a back up quilt for each)! So here is the count so far: